The Coalition for Arts, Culture, and a Healthy Economy (CACHE in Medford, Inc.) was founded in 2010 as a way to bring the diverse cultural organizations of Medford together to discuss the state of the arts in Medford, share experiences, and network. This coalition quickly grew from five organizations to twenty. Today, CACHE is behind three main events in Medford: 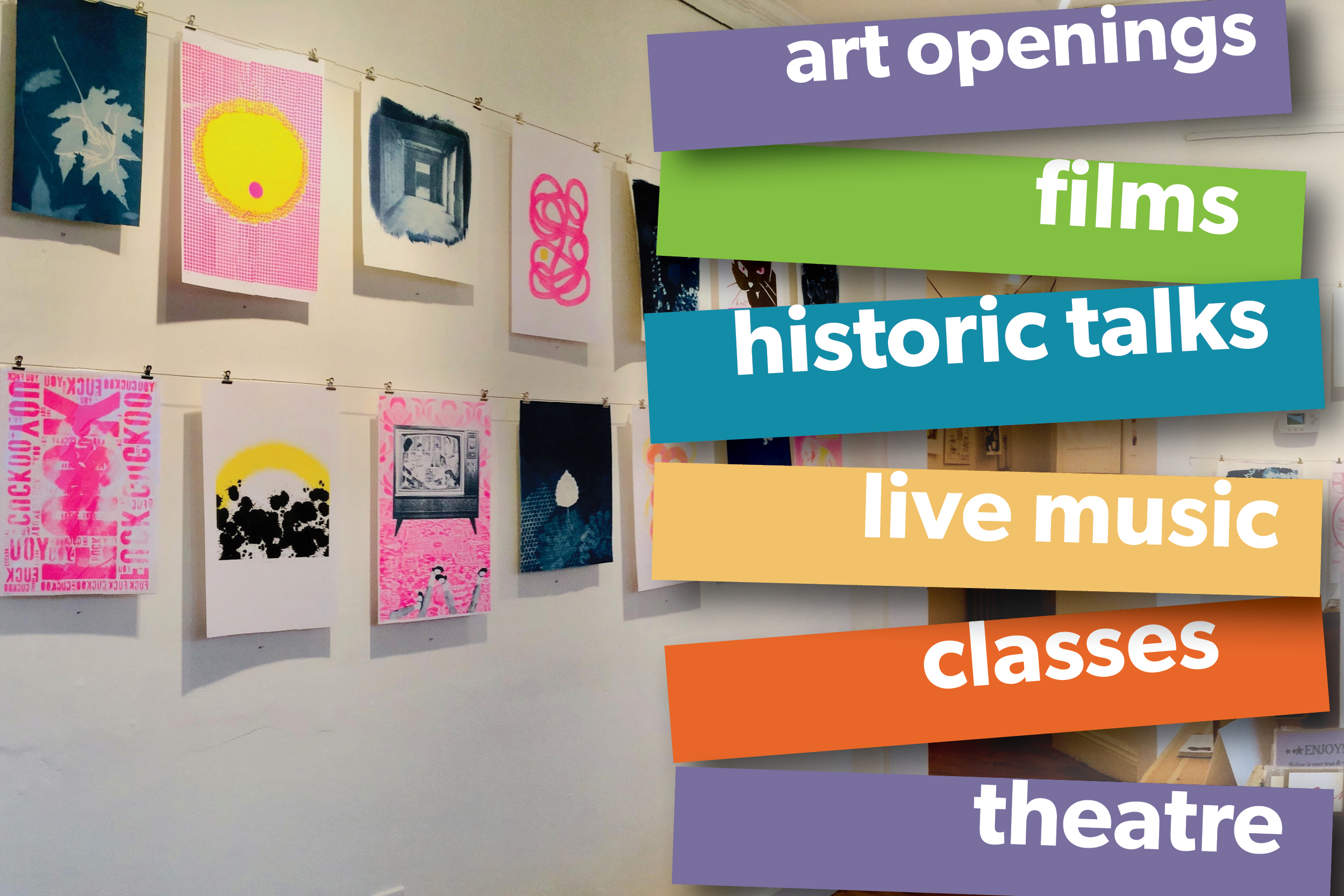 Music, art, live performances, and other free entertainment for all ages in downtown Medford Square in the summer. A free one-day arts festival at the Condon Shell along the Mystic River featuring music, art vendors, activities, and more.

CACHE Board of Directors

Each year, the CACHE Board of Directors recognizes an individual who has made substantial contributions to the arts and culture community in Medford.

2022 Winner
Matt Heaton is a versatile, eclectic Medford musician known for his performances which range from traditional Irish guitar, to the band "Matt Heaton & The Electric Heaters" to his "toddler-billy" tunes of "Matt Heaton and the Outside Toys". Matt has been recognized for his dedication to providing families and children access to music - particularly during the pandemic when he offered regular free, virtual performances. Matt has also performed at several CACHE festivals over the years.

2021 Winner
Sam Sednek, Children's Librarian at the Medford Public Library has worked tirelessly for years bringing literature, creativity, and connectivity to youth in Medford. A staple at Medford's many events, Sam has contributed tremendously to arts in culture in Medford by continually challenging adults and children alike to harness their inner creativity in community projects, even throughout a pandemic and library transition.

2018 Winner
Doug Carr has been a tremendous supporter of CACHE and has donated countless hours of his time to the renovation and preservation of the Brooks Estate and telling the story of the Brooks Family and their relationship to Medford and the arts.

2017 Winner
Ken Krause, a quiet force behind many successful arts, culture, and environmental initiatives in Medford including the CACHE Arts and Culture Calendar.

The mission of ArtsAlive Medford Foundation is to enhance the quality of life in the City of Medford by advancing arts, culture and history and by providing resources and being an advocate that promotes the arts community. Contact artsalivemedford@gmail.com for more information

ArtsMedford, Inc. (formerly MACI) nurtures creativity, supports artists and the arts, and works to reflect the diverse community of Medford.  They make art more accessible for all by removing barriers to participation and bringing programs like Arts after Dark and  Mystic Makerspace  into the community. www.artsmedford.org

The City of Medford’s Chevalier Theatre owns one of New England’s rare Mighty Wurlitzer theatre pipe organs, a 1922 model saved from the wrecking ball at a Dayton, Ohio, theater and donated by the Maine chapter of the American Theatre Organ Society. The nonprofit Chevalier Theatre Organ Society was formed in 2002 to restore, install, and maintain the Wurlitzer, and to raise all necessary funds. Once operating, the organ will be used for concerts, silent movie accompaniment, educational programs, and enhancing other entertainment at Chevalier.

Dee Morris is an independent scholar and educational consultant specializing in the 19th century history of Greater Boston. She presents thematic walking tours and presentations at Forest Hills Cemetery in Jamaica Plain. Other programs, highlighting each community's past, are tailored for schools, libraries and historical societies. Her goal is to introduce contemporary people to their civic ancestors.

Whether writing a house history or an article about life in vanished times, Dee meaningfully connects the present with what has come before.

Friends of Chevalier Auditorium & Gene Mack Gym is a nonprofit organization dedicated to fostering financial and community support and being an advocate for the historic theater and gymnasium. Through promotion of cultural, theatrical, civic, and youth programs, the Friends strive to enrich the quality of life in the community. Since 1993 years, through fundraising efforts and hands-on volunteering, the Friends have performed or paid for physical improvements to the facilities; sponsored free community concerts; and worked with city officials to help bring the youth center in Gene Mack Gym to fruition in 2001, and full-time professional management to the theater in 2017. www.friendsofchevaliertheater.org

The Friends of the Medford Public Library is a non-profit, volunteer organization dedicated to providing funds for library projects and acquisitions, promoting the library’s services and activities, and assisting in maintaining a welcoming and patron-friendly environment. The Friends are a group of volunteers dedicated to enhancing and promoting Medford's local library as a valuable and vital community resource. www.friendsofmedfordlibrary.org

Jerome Street Studios is a small, co-operatively run art studio space in West Medford. Artists working out of the studio include a guitar teacher, a caterer and chef, a jeweler, a potter, and a mixed-media painter. www.jeromestreetstudios.com

Lakota YouthStay connects 10 to 15-year-olds from the Pine Ridge Reservation in South Dakota with hosts in the Greater Boston area for 9 days of exploration and discovery, building friendships and engagement through shared activities of interest. Lakota YouthStay is a program of the West Medford Community Center.

Loving Little Minds is a nonprofit dedicated to diversity in literature for children ages 0-6. As children begin to form their view of the world and how they fit into it, it's imperative they have access to books that represent diverse cultures and races. We curate and provide families with those resources. www.lovinglittleminds.org.

The Brooks Estate was first settled in about 1660, and was transformed into a Victorian summer retreat by Peter Chardon and Shepherd Brooks. It is graced by two fine Victorian buildings: the Shepherd Brooks Manor and Carriage House (1880), both under restoration. The Brooks Estate offers acres of open space, walking trails, Brooks Pond and a unique historic landscape. It is also critical habitat for birds and small mammals. Visitors are welcome to walk the paths and enjoy the quiet and beautiful outdoors. Owned since 1942 by the City of Medford, the Brooks Estate was permanently protected in late 1998. Restoration of the landscape and historic buildings is underway. www.brooksestate.org

Since 1926, the Medford Chamber enriches and advances the business climate for the entire community. The chamber membership is comprised of businesses of all sizes and industries to help the local business community collaborate, cooperate, grow and flourish. www.medfordchamberma.com

The Medford Educational Foundation is a private fund to supplement the city's public education budget by rewarding teacher innovation in the classroom. www.medfordedfund.org

The Medford Family Network (MFN) of the Medford Public Schools is a family support and parenting education program that is available to every child and caregiver who lives or works in Medford with at least one child prenatal through age seven. The goal of the MFN is to create a strong web of support for all families of young children. This is accomplished by making community connections in three ways:

Every Thursday from June through October, the Medford Farmer’s Market brings farmers and crafters to the Medford community to sell locally grown and produced goods. These include fresh eggs, produce, bread, grass-fed meats, cheese, honey, coffee, jewelry, candy, and more. The market is located at the Condon Shell on Mystic Valley Parkway and is open from 3-7pm. www.medfordfarmersmarket.org

This local historical society was organized in 1896 by concerned citizens from the city of Medford, Massachusetts. Their purpose was to collect and preserve the history of Medford, to correct the myths that had grown up over the years, to build a historical library, to collect the artifacts of local history, and to celebrate historical anniversaries. www.medfordhistorical.org

Outside the Lines Studio Expand

Outside the Lines is a non-profit, arts-based day program for adults with disabilities. Their mission is to provide a creative, supportive environment where each individual can explore their unique potential in a way that best suits their interests, talents, and learning styles. www.otlstudio.org

In the eighteenth century, the Royall House and Slave Quarters was home to the largest slaveholding family in Massachusetts and the enslaved Africans who made their lavish way of life possible. Today, the Royall House and Slave Quarters is a museum whose architecture, household items, archaeological artifacts, and programs bear witness to intertwined stories of wealth and bondage, set against the backdrop of America’s quest for independence. The Slave Quarters is the only remaining such structure in the northern United States, and the Royall House is among the finest colonial-era buildings in New England. www.royallhouse.org

Tufts University is a leader in American higher education, distinctive for its success as a moderately-sized university that excels at providing students with a personal experience.

West Medford Community Center provides a range of programs, services and events, all in the service of building community throughout the Mystic Valley Region. www.wmcc.us

Formed in Medford in 2008, Works-in-Progress Art Group is made up of about 14 local visual artists who meet monthly to discuss works-in-progress, technique, inspiration, and related topics. Members discuss works created with traditional and digital media, photography, printmaking, sculpture, and fiber arts.